On the 7th of April, 1868 Thomas D’Arcy McGee was walking home after delivering a rousing speech in Parliament. Originally from Ireland, He was one of the founding father’s of confederation but also a sworn enemy of the Fenian Brotherhood. They were a group of irish terrorists intent on independence from Britain. They saw D’Arcy McGee as a traitor. Was one of them the culprit who murdered D’Arcy McGee?

D’Arcy McGee was a well liked MP, a great orator and so that night he spoke of the future of Canada. He said “here is room enough in this country for one great free people;” Ironically, he did not realize he would not survive the night.

After his speech, he donned his brand new white top hat and began the walk back to Sparks Street where he had lodging. He reached his house, and banged on the front door to be let in. Suddenly someone stepped out, raised their pistol and shot him in the back of the head. He died instantly. 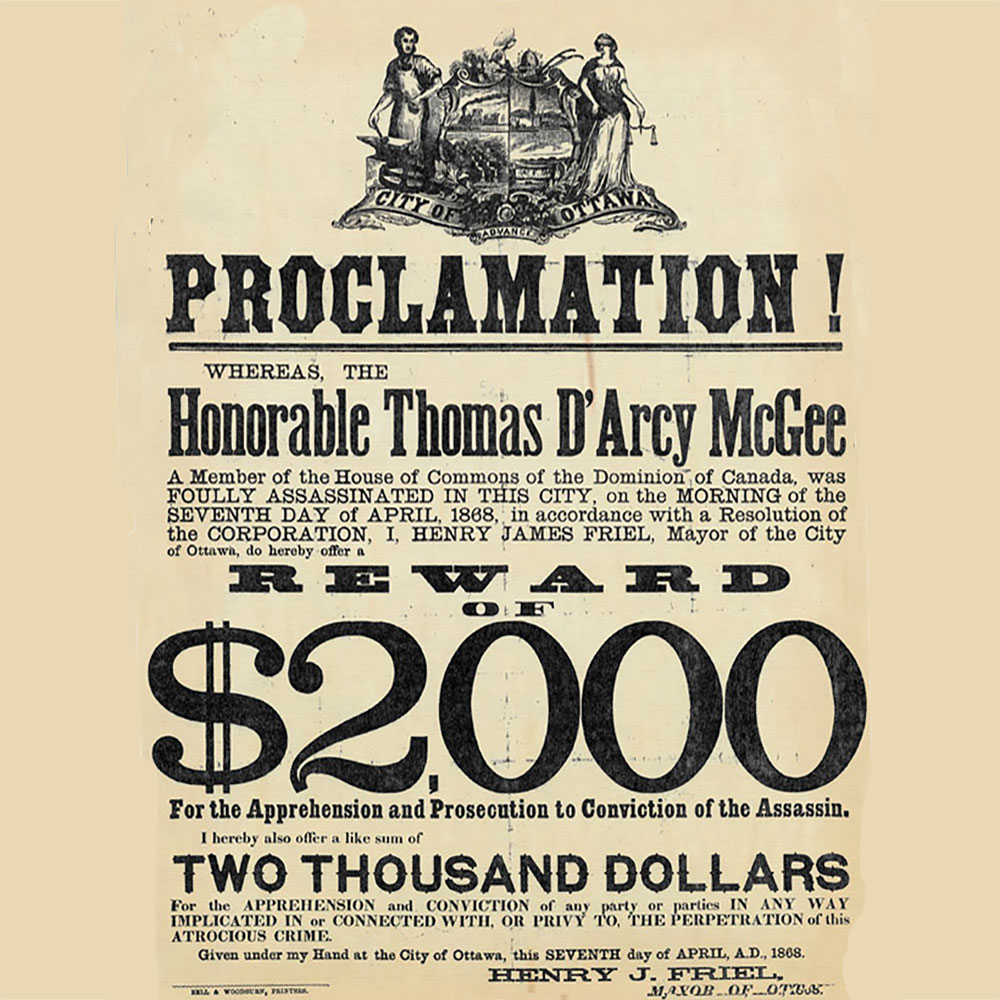 Rounding Up The Suspects

News of the murder went around the world, and all of Canada mourned his loss His funeral was one of the largest in Canadian history. Montreal at that time had 100,000 people and 80,000 people showed up for the parade. It was a sad day for this new country. This murder was to be the first and only assassination of a Member of the House in Canadian history. The police immediately posted a reward of $2000 for the person who murdered D’Arcy McGee.  Today it would be worth about $40,000. Everyone wanted a swift resolution to this heinous crime.

Ottawa police went out and rounded up all the Irish who had any connection with the Fenians. They also arrested the Prime Minister’s cab driver who said they should look at a red whiskered tailor named Patrick Whelan.

Police then went around to Whelan’s house and found Fenian documents and a Smith and Wesson pistol which had recently been fired. He became the prime suspect.

Patrick Whelan is the Suspect

Born in Dublin Ireland in 1840, Patrick Whelan was an apprentice tailor, but the great famine of Ireland saw him moving to Canada. He found work with another tailor in Ottawa who was also a Fenian supporter. The Police came down on him hard, yet he strongly protested saying he was definitely not the man who murdered D’Arcy McGee.

He said he had spent weeks trying to sell his gun and it had been accidentally fired by a maid cleaning his room only a few weeks before.

He said he was a fan of D’Arcy McGee and had heard him deliver his last speech in Parliament that very same night.

He had personally warned McGee three months before of a plot against his life. What possible motive could he have? He was simple tailor and he said he wasn’t interested in politics or the Fenians.

But things were not looking good for Patrick Whelan. He was charged with the murder of Thomas D’Arcy McGee.

At the trial the odds were stacked against Patrick Whelan.

Canada’s first Prime Minister, John A MacDonald, was the best friend of Darcy McGee and sat next to Judge Richards who was also a good friend of D’Arcy McGee. An all Protestant Jury was selected to try this Irish Catholic.

The Prosecution Witness Jean-Baptiste Lacroix did not recognize Patrick Whelan in the courtroom. Nevertheless, he stated that he saw Patrick Whelan follow D’Arcy McGee home on the night of the murder. He said D’Arcy McGee was wearing a black top hat. We all know it was a white top hat.

Another prosecution witness was a policeman who said that he heard Patrick Whelan talking to another inmate. He heard Whelan say “I shot the fellow…I shot him like a dog.”

A defense witness testified that Patrick Whelan’s maid had seen his pistol under a pillow and accidently shot herself in the arm with it, six weeks before. But experts said the powder residue on the gun, was only 2 days old.

Manny Fenian papers were found in Whelan’s room. He said he wasn’t a Fenian but had no explanation for the membership cards for radical Irish societies.

The trial took 6 days and the prosecution was relentless. Patrick Whelan didn’t help matters by eating apples during the trial and watching the flies on the ceiling of the courthouse. He should have been concentrating on the Judge Richards and the jury.

Even though all the evidence was circumstantial, with contradictions and questionable testimony from the witnesses, the Protestant jury took a very short time to find Patrick Whelan guilty.

Judge Richards finished the trial with “The sentence of this court is that you, Patrick James Whelan, having been accused and found guilty of the murder of Thomas D’Arcy McGee, be taken from this place to the place from whence you came and there be hanged by the neck until your body be dead, and may God have mercy on your soul.”

Patrick Whelan shouted back: “All that sentence, my Lord, cannot make me guilty.”

Patrick Whelan then wrote a letter to John A MacDonald, pleading his innocence, but no reply was ever sent back. The hanging date was set for 11 February 1869.

On the day that Patrick Whelan was to die, he ate a hearty breakfast. A priest paid a visit. He then mentioned, that although he was innocent, he knew the murderer personally. It was a bitterly cold snowstorm in early February, and yet 5000 people came out to watch him die, including hundreds of boys and girls. Patrick Whelan’s execution was to be the last public hanging to take place in the Dominion of Canada.

It was the 11th hour on the 11th day. On the scaffold, Patrick Whelan looked pale with beads of sweat on his forehead. He forgave everyone, begged the pardon of everyone. He then said “God save Ireland and God save my soul.” A white bag was placed over his head, and the noose adjusted. The hangman pulled the lever, the trapdoor fell, and Patrick Whelan was launched into eternity. Many clapped, as his feet jerked in the air.

But his conflicted spirit still roams around Ottawa protesting his innocence. His ghost is usually hanging around the Ottawa County Courthouse and jail, but sometimes his anguished soul roams visits the old cemeteries where some of the Protestant Jury are still buried. He is caught between this world and the graves of those he believes have wronged him… the people of Ottawa.

On our Ghost Outing Rideau River adventure, you have the chance to capture his spirit and return him to the jail where he belongs. Be careful. He is a vengeful ghost. Pray he does not get the better of you.