Around 200 years ago there was a rebellion in Ontario to reform Upper Canada. It started with a Scotsman, Robert Gourlay who came to Canada and saw a need for big changes. He began organizing supporters who could create change in their community. How can we improve the province? How can land be distributed fairly? For daring to ask these questions, he was banished from Upper Canada.

William Lyon MacKenzie later on continued the reform movement with ideas like free education, the right for women to vote and better conditions for the poor. When the British government refused to listen, He organized the Upper Canada rebellion where those wanting reform would march on Toronto and start a revolution. Two of his leaders in the rebellion were Samuel Lount and Captain Peter Matthews. 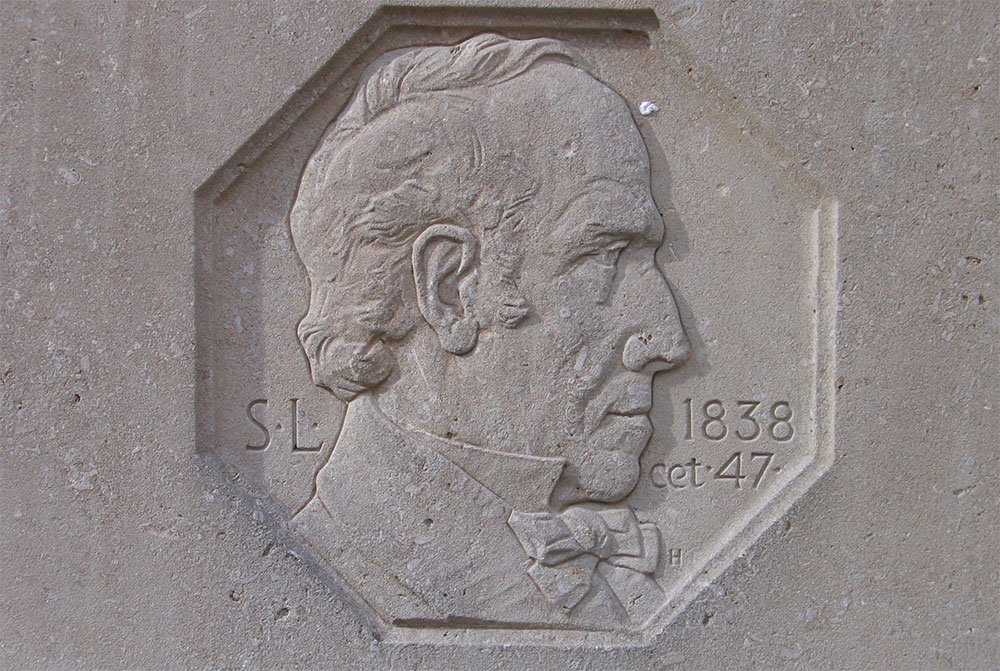 Samuel Lount was a blacksmith at Holland Landing. In 1834 he was elected as Member of Parliament for Simcoe County. He helped start Canada’s first farmer’s co op. He was a big believer in reform and jumped at the chance to help change the terrible conditions that existed in Ontario at that time.

When William Lyon MacKenzie began organizing a “constitutional convention” Samuel was selected as one of the main delegates. He believed in free education for all, he felt that women should be able to vote in all the elections. He began organizing volunteers to join a planned march on Toronto.

Captain Peter Matthews was a distinguished soldier who had fought with General Brock in the war of 1812. He then became a farmer in the Pickering area. Life was difficult in the rural areas on those days and Peter Matthews became active in reform politics. He helped build a school, he helped improve Brock road and his sons also served in the militia. He believed in serving others. His local Baptist minister convinced him to join Mackenzie’s movement. He also began organizing volunteers to march on Toronto and make a difference. 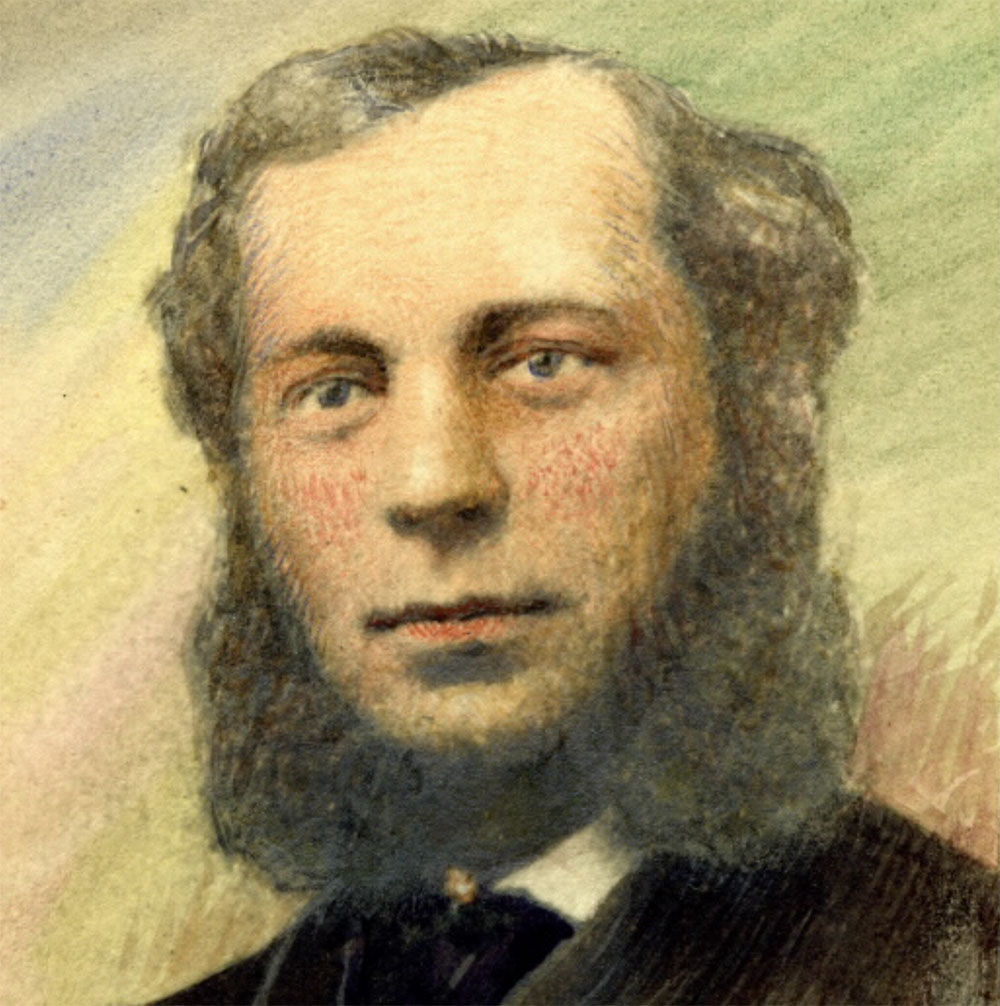 On the day before the rebellion in Ontario began, Samuel Lount gathered around 100 men in Holland Landing and marched down Yonge Street to Montgomery’s Tavern at Eglinton. The next day they marched down to Gallows Hill, now St Clair and met with a government official, proposing a truce to save any violence. The government refused. They then marched down to Maitland and Yonge, where the battle began. Samuel Lount had two rows of soldiers lined up. The first row fired their rifles and then dropped to the ground, so that the second row could fire their weapons. But these farmers had never fought before. When the first row dropped down, they thought the first row had all be hit and died on the spot. Scared and confused, they turned and ran away, leaving the first row on their own. The battle was already lost and Samuel Lount fled the scene.

Meanwhile Peter Matthews had marched to Gallows Hill with sixty of his men from Pickering. They were asked to burn down the bridge over the Don river and then steal all the government mail, stopping any communication. They were to draw the government troops in that direction. He managed to set the bridge on fire, but came under attack and retreated. The bridge survived. He did manage to steal all the govenrment mail, but by that time the rebellion was over. Peter Matthews returned to Pickering saying to a friend “I know my doom if I am taken” and drew his hand across his throat.

After the rebellion in Ontario, Samuel Lount mode his way west through Dundas, across to Paris and then down to Long Point on Lake Erie. He planned to escape to the United States. With another rebel, they stole a small boat and began rowing, but a strong wind blew them back to the shores of Ontario. They tried the next day and wind blew them back again. They drifted into the mouth of the Grand River where a farmer took them prisoners thinking they were smugglers. The authorities soon discovered who they were and they were sent to Toronto Jail. 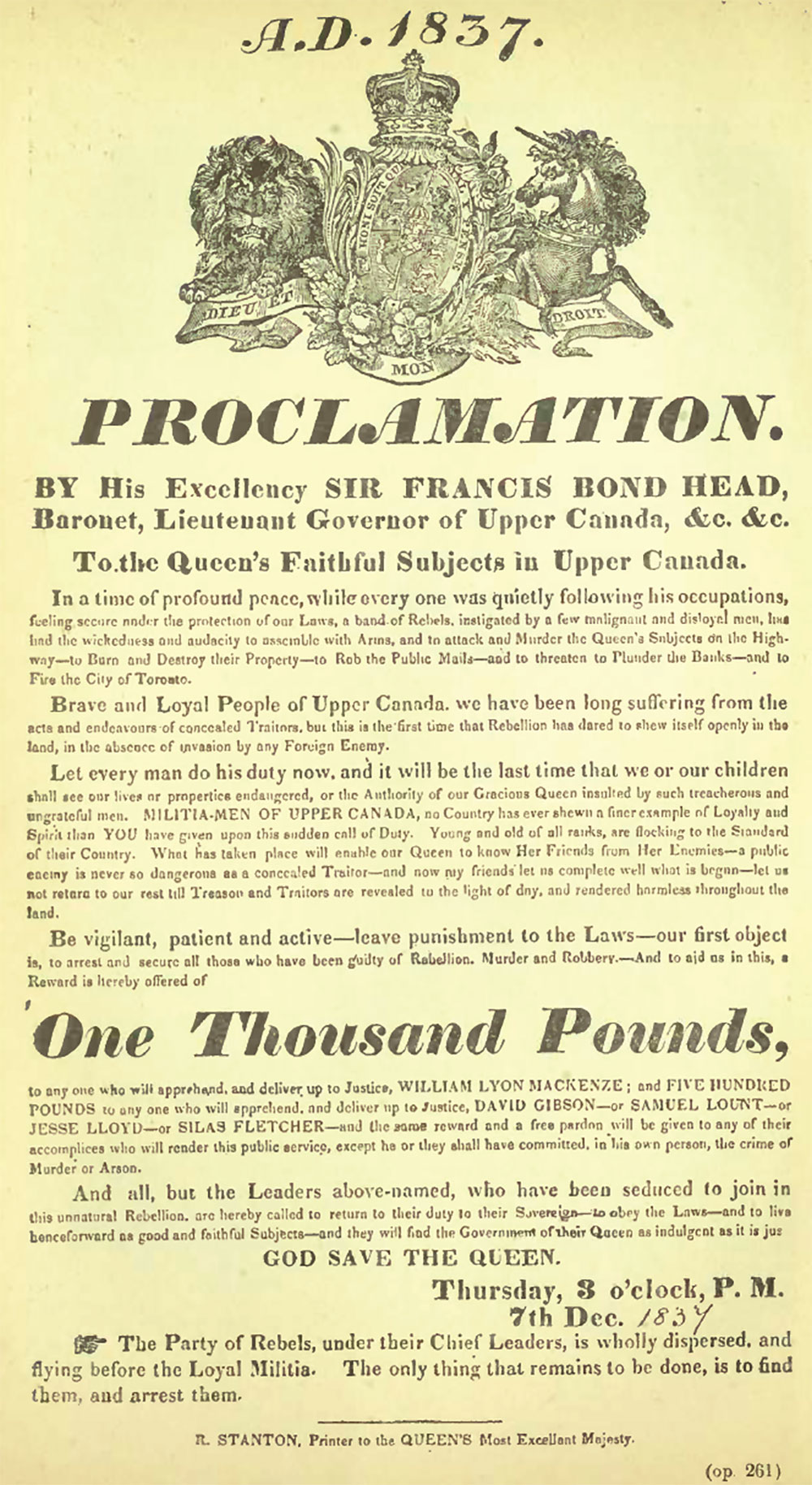 Peter Matthews took to the ravines around Rosedale and over the next few days made his way to a sympathizers house near Markham. Exhausted he slept the night. There was a huge snowstorm in the night, so he thought he was safe. But in the morning he awoke to find a rifle pointed at his chest. He was a big man and immediately grabbed the man holding the rifle and threw him across the room. Others rushed in, arrested him and he was also marched off to jail.

In March of 1837, Lount and Matthews were brought before the court for their trial. They both pleaded guilty and their date of execution set.

The day of execution arrived. The place was set at Courthouse Square, the traditional place for public hangings and floggings. 35,000 people had petioned the government to change the sentence to imprisonment, but the government felt they had to set an example. At eight o’clock in the morning at this very spot, the two men resolutely stepped up to the scaffold with calmness and self control. A noose was placed around their necks and cap placed over their heads. A huge crowd was gathered around this area to watch the horrific scene. The minister said a prayer, a lever was pulled and the two rebels were launched into eternity. 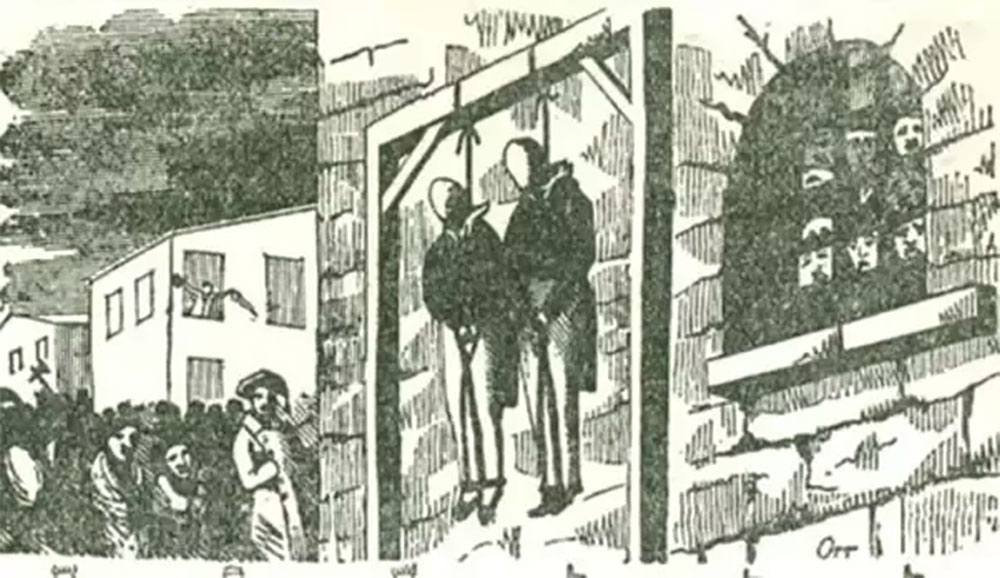 They did not die in vain. The rebellion made an enormous impact on the British government and they realized they had better make some changes or there will be another rebellion. And so within a short time, the Province of Canada was created and thirty years later, Federation gave Canada control over it’s destiny. Only four years after the hanging, Queen Victoria pardoned Samuel Lount and Peter Matthews. Today they are known as the first martyrs of Canadian liberty.

You can relive this story on our Ghost Outing Adventure in Old Toronto. Your mission is to release the rebel ghosts from Court House Square – the original hanging grounds of Toronto.